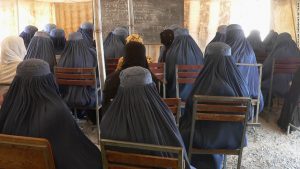 “Secret police sat on the front row. I had to be careful. They were listening intently, for we had called this meeting without permission.”

Hala* stood before 200 fully-covered Muslim women in a meeting room in the Middle East.  She told them, “I know how devoted you are to Islam …You fast and pray. But on the other hand, I feel sorry for you. Because you can never be sure of your salvation.”

Beneath their burqas, the women nodded. Hala boldly turned to the four secret police, asking, “Would you please leave the room? I need to speak with these women in private.”

The officers left the room. Once outside, they called four more officers to join them. Inside Hala explained the gospel. “You need to pray to the God you do not know, who is risen from the dead and wants to forgive you and give you peace. Tell Him that you want to know Him personally,” she urged.

“All 200 women were crying. I asked those who wanted to follow Jesus to stand and pray. The entire group, every one of them, stood! I wanted them to fully understand what they had just done. So we gave each woman a Bible and DVD of Magdalena, the adaptation of the JESUS film for women.

“Christian DVDs and Bibles are illegal in this country. We knew the secret police would confiscate everything. Worse, I had insulted the officers by asking them to leave. As the women walked out, they held their Bibles and DVDs in plain sight. With the police watching the women, they saw nothing. They confiscated nothing that day! We have now been discipling these women to be lights of truth to their families and culture.”