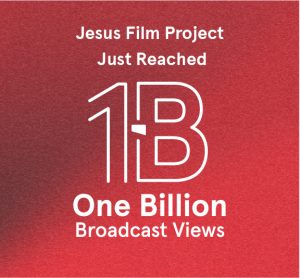 Jesus Film Project is celebrating a huge milestone. By God’s grace, our films have reached 1 billion broadcast views! This number reflects the number of televisions across the world that tuned in to watch our films in just the last six years, from 2016 to 2021.

In 2016 we started tracking television views of our feature-length films, like the JESUS film and Magdalena: Released From Shame. That year the films garnered almost 18 million views. Every year since then, broadcast viewership numbers have seen steady growth. In Africa, local teams started airing Walking With Jesus and The Story of Jesus for Children. And as many families sheltered in place on Easter 2020—at the height of COVID-19—we know that JESUS was on their screens. A total of 312 million households tuned in to watch in all of 2020.

Last year, faith-filled local ministry teams and everyday believers took films to secular televisions stations, many of which are led by station managers who don’t know Jesus. Still, they agreed to air the films at Easter, Christmas and on other major holidays. God is at work!

Why is this number significant?

This kind of viewership demonstrates the reach of evangelistic films on television, even in today’s high-tech world. Broadcasts are essential to Jesus Film Project’s 2025 goal of seeing 1 billion reaches per year. In 2021 our films received a total of 401 million broadcast views, a number promisingly close to the halfway mark of our 2025 goal.

Entire families are encountering the story of Jesus at home, and in areas with little access to the gospel. People are hearing Jesus speak their language in places historically closed or resistant to the message of the gospel, like countries in Central Asia and Southeast Asia. To put this in context, one of the countries where films aired in 2020 counts with fewer than 6,000 believers.

Seeing God open these doors fuels our hope and our vision to see the Great Commission fulfilled in this generation. More than ever before, we’re committed to helping everyone, everywhere encounter Jesus.  We’re excited to see what doors God opens next as we follow His leading.

Thank you for the role you’ve played in this milestone! Your contributions, your encouragement and your prayers make it all possible as you equip us to take the gospel to the world. We are so grateful for you.